On the third day in Wuyishan I got up early determined to drink good tea no matter what the cost.  I had made a date to drink tea at the Jinpao（金袍 - Golden Robe）Tea factory in the afternoon, as old customers had reservations with them for the morning.  My friend and I decided to go to Xingcun（星村） and ride the bamboo rafts down the river. 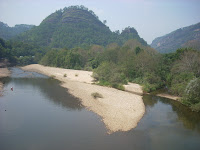 We tried taking a cab, but the cab couldn't go down the road because traffic is restricted during the tourist season.  We decided to walk to Xingcun instead.  We made a detour through some villages with lots of tea gardens and also walked down a path to the Nine Bends Stream where I took a nice picture of an iridescent dragon fly perched on a rock. 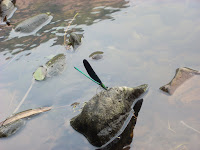 Eventually we got on a public bus and rode all the way to the end of the line.  Conventional wisdom says not to buy tea from Xingcun.  The farmers there sell all of their tea leaf to large factories and then buy cheap chaqing (茶青， unprocessed tea leaves) from other areas to make their Yancha.  Therefore it is not real Zhengyan tea, and therefore not so good.  My friend and I wandered around Xingcun to get a sense of direction, and happened upon a little shop selling firecrackers, cigarettes, incense, paper money, and of course tea.  We went in and had some of the tea the wife was sorting, it wasn't so good, but the husband invited us back to his home and tea factory to have some better tea. 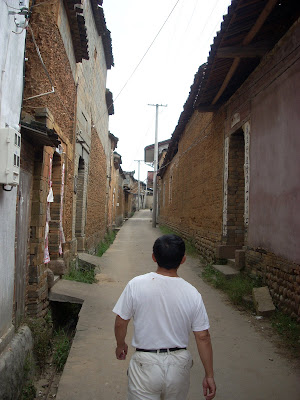 He led us through the winding alleys and backstreets of Xingcun to his house, up on a small rise.  In the first picture of the backstreets of Xingcun the reader will see Mr. Li's back in the foreground as he leads us along the backstreets of Xingcun.  The buildings in this area of town were traditional construction made from packed earth.  As the earth in Wuyi shan is red, it adds a pleasing natural color to the walls.  In addition to the beautiful red earth, crushed ceramic and gravel is added for texture. In the detail photo you can see where tea ware goes when it dies. 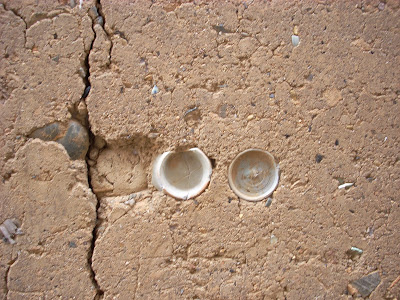 Bowl bottoms make an interesting detail in the earth walls.  The earth is pounded into place, and in the center of the walls are boards and grass to add structural support. The foundations are more substantial stone or brick construction, and most earth walls are no more than one story high. A second story is constructed with hollow brick walls.  Sometimes wooden garrets are made under the eaves perfect for imprisoning orphans, if you have been reading too much Dickens.
In the third photo the reader can see the various layers of construction materials.  The foundation is brick, then a layer of round, medium sized stones on the right.  Above the earth layer, one can see the hollow brick construction which makes up the stepped square facade.  Also of note is the beautiful old well surrounded with stones. 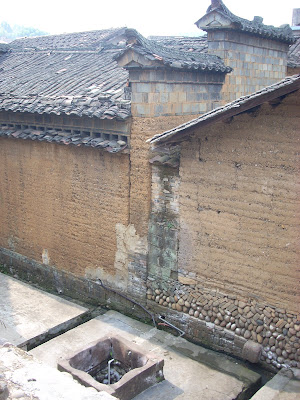 Mr. Li, our host had a nice two story concrete house with his tea processing equipment taking up most of the substantial courtyard.  As we entered on the left there was a bank of about 40 pots of orchids, all of which he had dug up and taken home, unfortunately few were in bloom.  He also had a potted Baijiguan (白鸡冠 white cock's comb) which I snapped a picture of. 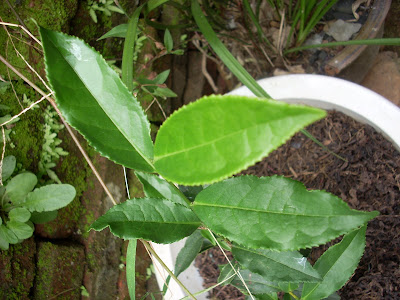 If you look closely you can see it is fertilized with spent tea leaves.

At Mr. Li's house we drank about 4 different teas.  He was a much more down to earth guy than a lot of the tea sellers.   Mr. Li strikes me as a farmer who is a good tea processor and businessman, but who is not involved with the tourist trade very much. Most tourists come to Xingcun just to get on the bamboo rafts and float back towards the resort area.  He also had very down to earth prices.  I didn't ask him if his tea was 'Zhengyan' or not, mostly because his prices were 120-180 RMB per jin(500 grams)  He told us that most of his tea was for blending and later sale as Dahongpao.  We drank some Laocong Shuixian, Rougui, Beidou #1, and some 105.  Mr. Li says his customers blend the 105 and Rougui to make Dahongpao, and also they sometimes use the Beidou #1.  Mr. Li's teas were all pretty high fire, and well oxidized which is how I like it.  When he made Gongfucha, he made it like a local.  To make Yancha like a local, you fill up the gaiwan with as much leaf as possible, even pushing the leaves down a little bit if necessary.  Instead of instant pours, you let it sit for as much as 30 or more seconds even on the first infusion.  This is how I like to drink Yancha.
I bought some of the Laocong Shuixian and some of the Beidou #1, which he said still needed to rest (or tuihuo 退火) and then be roasted again.  He said Tea should rest at least 20 days between roastings.  I bought the Beidou anyway, because it was already pretty roasted, and I liked it.
After leaving Mr. Li's house we found a great little restaurant run by Chinese who had come back from living in Vietnam. They made wonderful Vietnamese noodles with no meat or vegetables, just sauce, and my friend and I ate lunch for 7RMB or one dollar US between the two of us.
At the Bamboo raft area the lines were long, and some people told us that we wouldn't be able to buy tickets.  We walked out of Xingcun to the main road to wait for the bus. On the way to the main road there were tea bushes on either side of the road, click on the picture below to see a larger version, three men and a tea bush trimming machine can almost be made out. 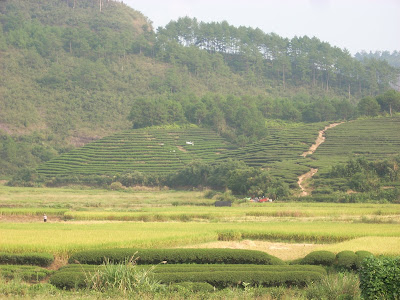 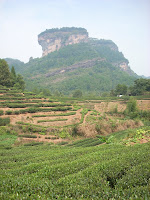 I hope others may profit from my experience at Wuyi, just as I profited from those who blogged before me.  Please feel free to email me with any questions. I may not be able to answer them, but can promise to live vicariously through you or anyone who is planning a tea trip.  I can also provide more phone numbers, addresses of places I went to, as well as names of factories with good reputations that I have yet to visit.
Posted by LaoChaGui at 6:38 AM

very nice episode of your journey.i wish i was there.
I'll go there maybe in one or two years., and your posts will really help me.
Thanks a lot...I can't wait to read you again

What an amazing journey! Just want to get permission to link up to my blog? Cheers - Toki

Thank you both for the wonderful comments!

Toki,
Feel free to link to my blog, I would be flattered.

Another really good read. Did it kinda seem as though everybody was withholding the good stuff? When you show little interest in a sellers teas do they keep bringing out different teas trying to find one you,ll buy? But the teas they bring out are not really better just different? Looks like you had a really cool vacation though. Dont let the tea spoil it for ya.

Bret, one of the reasons I found it hard to get people to bring out their good tea is the friend I was with runs a tea shop. He wanted to find a cheap tea to buy in bulk, so he kept asking people if they had anything cheaper, while I was asking if they had anything better. Some shops may reserve good stuff to age or for old customers who they know will be back year after year.

I did have a great time, but I also want to emphasize the points that were frustrating, or not so great so others can avoid them. Hopefully I was able to do that without being overly negative.

Excellent article. I haven't been to Wuyi yet, but this gives me a pretty good idea what to expect.
It's interesting to read your opinion about the light oxidized Oolongs there.

As for Mx. Xiong's advice, I can agree on the first part, sharing your best tea with the seller to put the bar very high. However, I'm not sure that lying about the price will help (unless it was overpriced in the first place). It's difficult to become friends with a tea person if you make a claim that insults his intelligence: top teas rarely sell cheaply. In Taiwan, tea prices are quite straightforward when you are experienced enough, so I don't play such tricks with tea farmers. In China, I also hear that prices are much more 'flexible'. An alternative strategy would be to say that you don't know the price of your tea, because it was a gift. (The best teas are given, not sold...)

You said:
It's difficult to become friends with a tea person if you make a claim that insults his intelligence: top teas rarely sell cheaply.

I couldn't agree with you more. I hope I don't sound immoral, or jaded with my description of Wuyi. I did feel as though many of the people selling tea there quoted ridiculous prices, and quoting another equally ridiculously low price in return was kind of how business was done (among some people.)

I do appreciate the feeling and respect with which you approach tea, Stephane. It is a much more fulfilling practice when the business transaction part is concluded respectfully, quietly and takes a subordinate role to the appreciation of sharing an exceptional tea with another human.