Hongshui oolong is a style of tea created on the island of Taiwan by mixing Anxi and Wuyi processing techniques. They are ball shaped (like Anxi oolong) but more oxidized (Wuyi oolong) and not as heavily roasted (Anxi oolong). I read this information on the Houde blog here, and it sounds believable. However, in the past I think more oxidization and heavier roasting was more common in Anxi than it is today.

Terence, a tea friend of mine has sent me three different samples of Hongshui, the first I believe was from Houde, and I liked it. But, if I remember correctly it was only one session worth a couple of months ago. Later, after I expressed interest in the Hongshui, Terence sent very generous packages of Hongshui from Teamasters, and Toptea.

The Teamasters Hongshui is from Dongding, it is ruanzhi cultivar, and was plucked in November, 2008. The dry leaf is dark, black and green, and very shiny. The photograph below shows the leaf resting after a flash rinse. 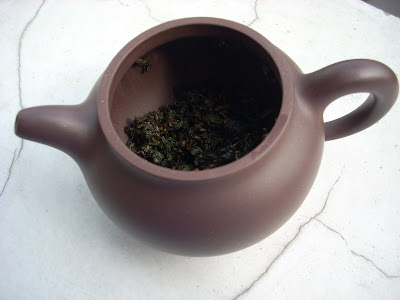 I decided to compare the two teas from Teamasters and Toptea in order to gain some insight into Hongshui. I preheated glass mugs, added about two grams of each tea and infused them in about 75 ml of water for 6 minutes. I also compared a Spring 2008 Classic Dongding at the same time because both Teamaster's teas I had on hand were from Dongding.

I found the Toptea Hongshui darker, and thinner in the mouth. A pleasant fruity flavor, but the huigan was very weak. The Teamasters Hongshui was astringent, cloyingly sweet, and not as pleasant as the Toptea after 6 minutes, but the huigan was very pronounced. When brewed properly, this tea would have a lot to offer. The Dongding was darker, with slightly less huigan, but very intriguing to me personally because of an intense cardamom or mace aroma/taste. It was very hard to pin down exactly, but it reminded me of my father's recipe for mulled cider. I even had hints of cinnamon, but not pungent like cinnamon usually is.

In a comparitive tasting with two gaiwan, I used relatively fewer leaves brewing the Teamasters than with the Toptea. I still found it darker, but thinner in the mouth and with an almost unnoticable huigan compared to the Teamasters. It seemed that the Toptea had a higher oxidation which would explain the darker soup. A more thorough roast would explain the lack of any astringency. Perhaps a more thorough roast would also explain the thinness and lack of huigan, although I am not certain. I am not certain of the prices of any of these teas, as they were gifts, but The Teamasters Hongshui certainly had more to offer.

I later brewed the Teamasters in a zini ball shaped pot which I use for Taiwan oolong. A couple of days later after the pot had dried, I could still smell the distinctive aroma of the Hongshui. 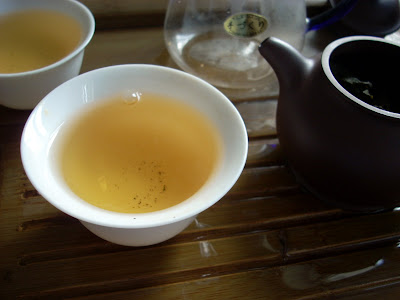 In the first two infusions, there is a mild roasted taste, and a very distinctive hickory flavour. The tea is very sweet when not over infused. The above picture is from the second infusion. 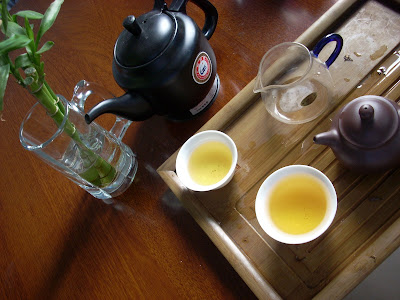 By the fourth infusion pictured above, the roast taste was no longer present.The hickory began to relax by the fifth infusion. By the seventh infusion 4 minutes produced a weak cup, but up until the sixth (pictured below) that powerfuly sweet huigan was still present. 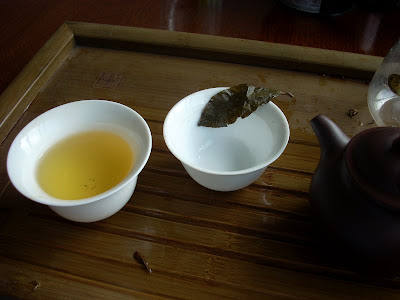 I was impressed by this tea. It has a great huigan, and a good roast, that is noticeable, but that did not affect the tea adversely. In my opinion, one must be careful when brewing this tea because the roast did not penetrate the middle of the leaf fully, so too much leaf or over-infusion will make it cloyingly sweet. This Hongshui tea soup was lighter in color than the other two I have tried, and may be lightly oxidized by Hongshui standards. In Phyll's blog, you can find an excellent picture of a more oxidized 2006 Hongshui also from Teamasters.

Posted by LaoChaGui at 4:21 AM

It seems I made a careless mistake. I linked to a post in Phyll's web log about Guifeicha instead of Hongshui. It seems my browser window was too small, and I saw the label for hongshui on the leaves to the left, and didn't realize they were just there to compare with the Guifeicha on the right. There is a post on Hongshui also with a nice picture at the address below.

As an Oolong lover myself I find this delightful. Any mix between Anxi and Wu Yi sounds good to me.

I'm discovering many many new "worlds" through your posts and blogs.... truly thankful is my heart and being "followed" by you!

Hope you haven't given up on your blog! I have read some of your posts over the past few months and thought many were very interesting. How is life in China?

Thank you a bunch for sharing this with all folks you actually recognize what you are speaking approximately! Bookmarked. Kindly additionally consult with my site =). We could have a hyperlink alternate contract among us

What's up everyone, it's my first pay a visit at this site, and piece of writing is truly fruitful in favor of me, keep up posting these types of articles.