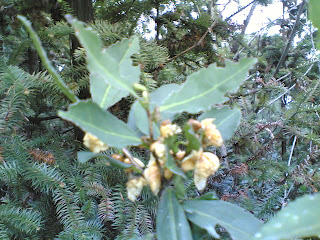 I went climbing in the hills again today, and am very proud of myself because I identified my first Wild Tea Tree without the guidance of anyone else. It is a good season for this as There are flowers now (at least this at this altitude and latitude. I don't know about anywhere else.) The fresh leaves smelled a little bit like evergreen with a touch of menthol, but mostly very vegetal, and not much like tea at all! The flowers were a lot smaller than I had originally imagined them. I have a picture of a tea flower in one of my books about Pu-erh where the Tea flower looks to be about the size of a child's fist(with no size reference present), but the flowers I saw were nickel to quarter size. The picture is probably just an enlargement, although it was a picture of a Yunnanese Ancient Tea Tree, which has bigger leaves than the variety in Zhejiang, and the plant I saw was just a bush, while many of the trees pictured in the book were hundreds to tens of hundreds of years old and are full blown trees. 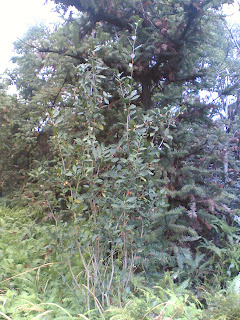 Walking in the hills is a great time for thinking things over and having fantasies and I thought about wild tea and how I must roam through all of the mountains looking for wild tea trees, collecting tea leaves and processing my own tea. I bet it would be really hard to make anything worth drinking without a proper drying device. The tea bush I saw brought to mind an article I saw on the Cha Dao blog The Role of Stress in Tea Growth and Manufacture. The author says that Tea Plants subject to stress of various sorts make better tea. I bet the plant I saw today would make great tea as it was totally torn up by insects.

Sorry about the picture quality. The first one is focused on the background, the second one is not great either, but I took them with my cellphone, so c'est la vie.
Posted by LaoChaGui at 4:20 AM No comments: Links to this post

Today I went out climbing for the second day in a row. I like to climb the mountains in this region of China (southern Zhejiang province) because although they are not all that high (the highest point in this county is about 4000 ft.) The Yandang 雁荡山 are one of China's most famous mountains, and also the mountains that inspired Xie Lingyun to begin writing nature poetry when he fell from favor in the imperial capital and was banished to the provinces. It was here roving in the Yandang mountains that he established his style of poetry that was later recognised as the origin of Mountains and Rivers Poetry 山水诗, possibly the most well known of Chinese poetry. This area is also one of the most developed in Zhejiang province, and is very noisy with the clamour of industry. Sometimes, if orders require it, little factories right outside my window run all day and all night. So, the mountains just a 10 minute ride from my dwelling in a 3-wheeled motorized taxi, are a welcome respite. 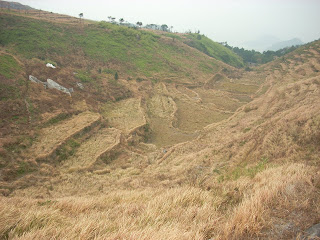 Today, I climbed past the point which I had reached yesterday. There were concrete paths leading up to near the ridge at which point the concrete gave way to old stone paths worn almost flat where it wasn't too steep. The stone continued a ways and then gave out becoming packed earth, very hard, but muddy in places and probably unpleasant in the rainy season. Almost everywhere is terraced fields, especially in eastern provinces. Zhejiang is also the most densely populated province in China. The terraces are largely unused now. With the abundance of industry and the jobs that it creates, many have given up the bitter life of toil that living off the fruits of mountain terraces often entails. I did, however, see one man on my way up who was coming down with a load of pine needles and kindling on a shoulder carrying pole. After passing through the terraced area, I re-entered the forest. In the forest, I passed a few abandoned houses, the one pictured below being the last, and then suddenly came out into a cleared area. 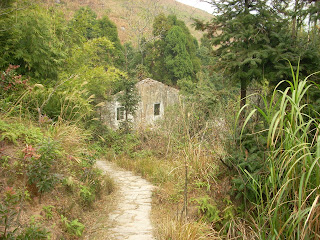 Unfortunately I didn't take pictures of what transpired next. I was happy to find a Taoist Temple with three men seated outside shooting the breeze. There was one old Taoist priest who could only speak the local dialect and two visitors who raised goats near the foot of the mountains. The old man asked if I wanted some water, and I said yes if it wasn't a bother. He brought out three cups of flower tea for his three guests. I expressed my happiness with the flower tea as I find it more thirst quenching than regular tea after perspiring. I was corrected. This was not flower tea, but tea flowers. I have drunk many kinds of flower tea: osmanthus, chrysanthemum, rose, jasmine to name a few, but never tea flower tea. I requested to see a tea tree and was brought to a nearby one on the path I had come on. There were more of the same flowers and the old Taoist explained to me that the best teas were the wild ones made from the leaf tips and that he would make me a pound of it this coming spring. I am not sure I want a whole pound of this poor old man's tea. He might be able to sell the tea, not to mention drink it himself or serve it to his guests. Although this man looks rather old, he has no trouble moving about; but collecting and drying a pound of wild tea could probably take a week or two unless there was an area of more concentrated tea trees. What I would like to do is go back and help him for a couple of days and maybe take home some tea made with my own hands. I already have about 3 ounces of hand picked tea flower tea that he insisted I take home with me (pictured). The flowers are now drying on the porch. I wish I could take a picture of the scent. 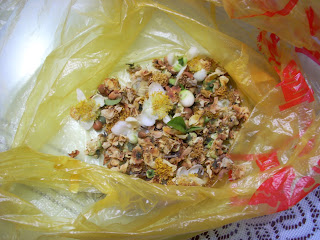