This past weekend I visited an organic tea garden near Yantou town, Yongjia County, Wenzhou prefecture. The elevation was around 600 meters, which is high for the area. I like an organic farm at the top of a mountain because there's no chance of pesticide runoff from other farms. The second picture is of a newly planted area, therefore it is not so nice looking. The grow the wuniuzao varietal which is made into green tea. 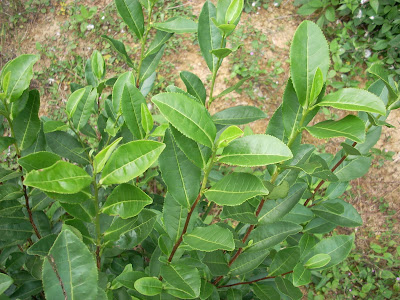 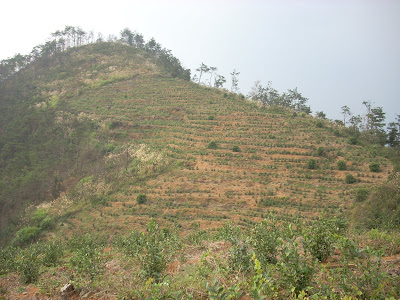 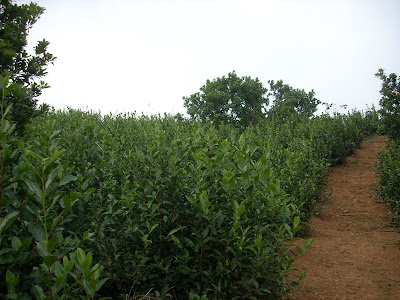 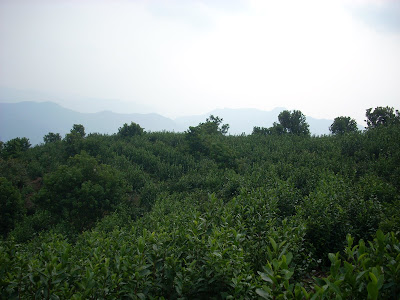 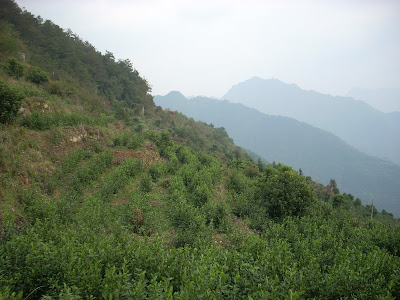 Posted by LaoChaGui at 5:36 PM 3 comments: Links to this post

Guangyun Gong Is No Longer Pu'er

I translated an article about new regulations on using the name Pu'er. As the title of the article states, the famous Guangyun Gong recipe of the Guangdong Import Export Company can no longer be called pu'er under these regulations. To read the full translation of the article please visit this link.
Posted by LaoChaGui at 12:22 AM 2 comments: Links to this post

I found a defunct tea forum in the course of my Inter-web surfing. Many of the posts are of limited interest, but the owner of the forum seems to have posted numerous translations of tea poems and other tea literature from various periods.

Translations of this type of work in English are very rare, and I was quite pleased to find this resource.
Speaking of tea poetry, I have decided to post my translations on my other blog instead of on this one. My other blog is also accesible through my profile.
Posted by LaoChaGui at 4:25 AM 2 comments: Links to this post 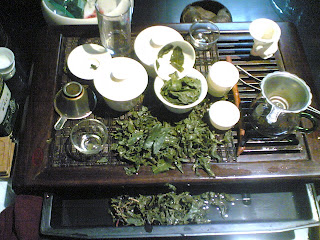 The God Of Tea was not pleased when I mouthed off last week and slandered TGY, so he punished me in a cruel way. I had to taste samples sent from vendors with my friend for about 3 days last week. This top picture is what the tea tray looked like when I arrived, the picture at the end is what it looked like about half an hour later (with a clean up in between).
My tea friend sent me a bunch of samples of heavily roasted TGY, which I don't really have the experience to enjoy yet. Some of the roasts were very strong, I haven't had a moderate TGY yet. On the other hand, I haven't tried them all. There were some really exceptional examples of other teas, though.
I would like to recant some of what I said last week about not liking green TGY. It can be very nice, especially when its fresh and high quality. I guess what I take exception to about TGY is more the people around here who drink it than the tea itself. When I walk into a shop they always ask if I'd like some TGY. It's always going to be cheap tea, and they don't really have anything else to offer. When I ask for something else they keep pushing TGY. Last Sunday a man from Anxi came to my friend's shop to sell us TGY. We were alone, and to make conversation I asked if he drank any other teas. He told me that not only his whole family, but everyone in China who knows anything about tea prefers TGY, especially in Beijing, Shanghai and Guangdong province. I just didn't say anything because I tend to react to such tea chauvinism a bit too strongly.
Posted by LaoChaGui at 5:56 AM 6 comments: Links to this post 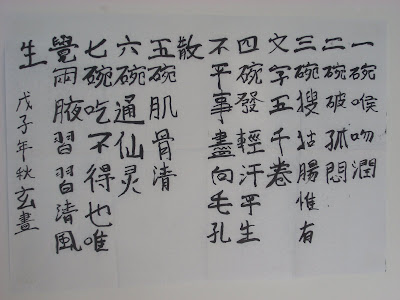 This is one of the most well know tea poems which I use to practice calligraphy.  I translate the poem below.
"Song of Seven Cups" from the poem: "Taking Up the Pen to Thank Mèng Jiànyì for Sending New Tea"
by Lú Tóng of the Táng Dynasty

One bowl moistens the lips and throat;
Two bowls shatters loneliness and melancholy;
Three bowls, thinking hard, one produces five thousand volumes;
Four bowls, lightly sweating, the troubles of a lifetime disperse towards the pores.
Five bowls cleanses muscles and tendons;
Six bowls opens the realm of spirit;
One cannot finish the seventh bowl, but feels only a light breeze spring up under the arms.
Posted by LaoChaGui at 5:24 AM No comments: Links to this post

Today I translated part of a Chinese language news article about the 68th Anniversary of Yunnan's Menghai Pu'er factory and posted it to Teadrunk.org. The translation can be viewed here.
Posted by LaoChaGui at 6:53 AM 2 comments: Links to this post

A tea friend has just started a new online forum for online chatting about Japanese and Chinese teas and teaware.
TeaDrunk.org
There are not many users or posts yet, but this blogger supports teadrunk.org wholeheartedly.

威廉。雅德利，祝你和你茶醉论坛圆满成功。茶醉万岁万岁万万岁！
Posted by LaoChaGui at 3:25 AM 2 comments: Links to this post