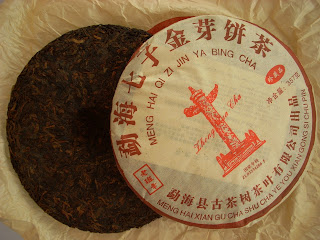 I bought a whole case of year 2000 Menghai gold bud Pu'er Qizi cakes while in Guangzhou on my way back from getting a new passport in Hong Kong. The leaves are of the super special quality level(teji.) The tea Market is huge, I've heard tell the largest in the country, and probably the largest in the world too. It's more of a Tea Section of the city than a marketplace as it consists of several streets of wholesale shops surrounding a market, which is more expensive.


I tried the tea for the third time yesterday, and took some pictures. I brewed it 5 times using the gongfu method and took pictures, but forgot how many more times I brewed it after that. Although pu'er has less caffeine than certain green teas, I did manage to get quite a caffeine kick out of it as I was drinking it by myself.

I was sitting on my large 6th floor balcony pouring and drinking the tea while reading Forgotten Kingdom by Peter Goullart and looking out on the cloudy landscape of a rural village turned urban too quickly, a phenomena quite common now in this country. Although Forgotten Kingdom is not about tea, it is about the the area just north of the Pu'er growing and processing area. Xiaguan, the city just south of Lijiang is the just about the northern limit of the Pu'er growing and processing area.

This is a great tea for a cloudy autumn day. It is a full flavored pu'er, one can taste the age. smells a bit like hay in an old wooded barn in the late winter or early spring, not like new hay. The color is pleasingly brown, and opaque when deep, but becoming very translucent when shallow. The buds can be seen throughout the cake, not just on the outside. 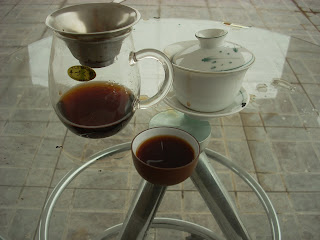 Very pleased with this vintage. here is a picture of the second infusion, the liquor came out the darkest and strongest, which is how I like it.

The day before I took my cake up the mountain to a Taoist temple that my friend runs. He was very busy as he had to preform a service the next day, but he received me graciously as if he had nothing better to do, and we sat and drank first Rensheng wulong (Ginseng Oolong) then my Pu'er and finally a Tie Guanyin which he claimed cost 2,000 RMB or almost 300 US dollars a pound. Maybe I had drank too much tea already, or my palate is not developed enough to discern the more subtle pleasures of the perfect cuppa, but it seemed to me it wasn't as good as the stuff I had tried in Guangzhou (Canton) for a fraction of that. He said my Pu'er was horrible and could only be used as medicine. But then again he doesn't like pu'er at all. I told him his tea was the best I'd ever had.
Posted by LaoChaGui at 8:08 AM

Tea looks good, nice golden buds on the surface of the cake. I've never seen this Menghai cake before.

Thanks for the comment, Bret. I am not suprised that you have never seen the cake before, as I have never seen it for sale outside China. I bought the thing in Guangzhou. I seem to remember they were about 17 dollars US per cake. I later met a tea-shopkeeper who said that it was fake, or that I was misled by the person I bought it from. He said this company didn't use this logo in 2000. I never actually showed him him the cake, only described the label. So it could have been a misunderstanding or miscommunication. Pu'er is always fun like that.