Let me start out by saying that I have tried a lot of "Taiwan Oolong" teas. However in the past few weeks I have realized that I don't know as much about Taiwan Oolong as one ought to after trying so many. My latest sojourn in China has lasted almost two years at this point, and I have had a few different Dongdings, Alishans, Dongfangmeiren, a Guifeicha and countless high mountain oolongs and many just marked "Taiwan syle oolong."

Late last year, I began trading teas with a couple of people in North America, and one of my tea friends Terence seems to have taken it upon himself to provide me an education in Taiwan oolong. I don't mean to sound facetious, as I am sure this wasn't premeditated, but it is what he acheived.

In addition to many other nice oolongs that Terence sent, he ordered me a Dongding Classic and a Hongshui from Teamasters. I opened the Dongding as soon as it arrived, and the first brewing was quite enjoyable. I had never had such an oxydized dongding before, and had never really understood what made Dongding teas special at all (one of the pitfalls of drinking fake TW oolong thats really from Fujian.) However, I quickly lost interest in the Dongding because I believed I had ruined it by not sealing it properly. Everytime it was infused it was overbearingly sour and so cloyingly sweet I would get a stomachache.

In general I noticed that many of the teas tasted like they had absorbed a lot of water and often tasted very sour compared to the "Taiwan" teas I had enjoyed previously. I tried roasting in my rice cooker and even a little pan frying to liven things up. Finally, while perusing some ancient entries in MarshalN's web log I read through a post about Taiwan oolong which helped to explain my conundrum. Taiwan ball shaped oolong is generally tighter than their Fujian counterpart. The roasting, therefore, cannot penetrate as easily to the center of the ball. Anxi oolongs usually have the stems removed and each ball is one individual leaf. Taiwan oolongs include the stem and many larger balls are made up of two leaves and a bud.  The stem can also influence the taste of a tea, often adding mouthfeel; but will absorb water easily and can cause a sour taste.

When I finally put all the pieces together I began to brew these oolongs less agressively. I used less leaf and was careful not to overbrew, and I began to finally capture the fleeting and elusive tastes I had been only able to extract rarely from so many of these teas.  I habitually drink Yancha, like a lot of leaf and don't mind an overbrew, but can't stand a weak cup. To brew my newfound Taiwanese teas, almost opposite parameters were required, and this also helped me to pay more attention to Yancha brewing and overbrew less. I began to get eight infusions where previously I was getting only three. Strong Yancha is still a personal favorite, but exploring a tea in all of its potential can be quite satisfying.

The next entry in this web log will attempt to compare Teamaster's Dongding Hongshui from October, 2008 with two other teas. 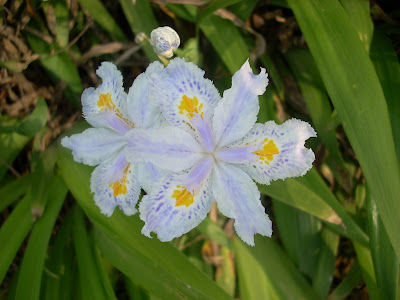